There has been a fair amount of misinformation in the media about public education policy in North Carolina. Honest disagreement on policy is good and should be welcomed by everyone. But false, baseless attacks are unfair to our citizens.

Case in point: The editorial column published in the News & Record on Sunday, August 23, “The War on Public Education,” by James Hogan, a former teacher.

In this piece, Mr. Hogan asserted that public education spending comprises only one-third of the state budget. He said, “Public education, including higher education, consumes about a third of North Carolina’s budget.” Not only is this statement inaccurate, it is irresponsible.

The truth is that public education comprises 55.9 percent of the state budget. That breaks down to 38.5 percent being allocated to K-12 education with the rest going to community colleges and the UNC system. Either Mr. Hogan didn’t do his homework on the state budget, or he is deliberately misleading the public.

Despite this and other inaccuracies, Mr. Hogan’s column received widespread coverage. In addition to the News & Record, it was also published in the Washington Post and on several popular education websites. It is unfortunate that the misinformation in this article was not corrected before it proliferated in the media.

To their credit, the News & Record ran a correction in the Tuesday, August 25 edition of the paper.

The overarching problem is that the public has a right to know what the facts are, especially as it relates to how their tax dollars are spent. It is perfectly fine to disagree on policy decisions, but it is wrong to spread false information in order to promote a point of view.

Not only did Mr. Hogan’s article contain false information on the state budget, it was full of sensational claims that are not based in reality. He accused the state legislature of embarking on a “war against public education” and “taking aim at teachers.” Statements like that are irresponsible and inflammatory.

Here are a few important facts related to public education in North Carolina:
When you consider these facts, it is irrational to conclude that there is a “war on public education.” If that were the case, would we spend over half of the state budget on education and increase funding several years in a row? That would make no sense whatsoever.

The real war on education is when people like Mr. Hogan make false, outlandish claims, such as accusing the state legislature of cutting “budgets to the bone” and “dealing a devastating blow to public school.” Such statements do nothing but create confusion and make it difficult to have a serious conversation.

Our legislative leadership and Gov. Pat McCrory care deeply about public education, and we are committed to building and maintaining a strong education system. It is unfortunate that our political detractors often resort to attacks, misinformation and scare tactics in order to promote their political agenda. Our citizens deserve better than that.

Note: Below I have provided charts that support the information in this article.

This chart shows where the public education budget was cut in FY 2009-10 and FY 2010-11 (when Democrats were in the majority), but has increased every year since.

This pie graph, which was created by the NC General Assembly's Fiscal Research Division, confirms that education spending comprises 55.9 percent of the state budget. 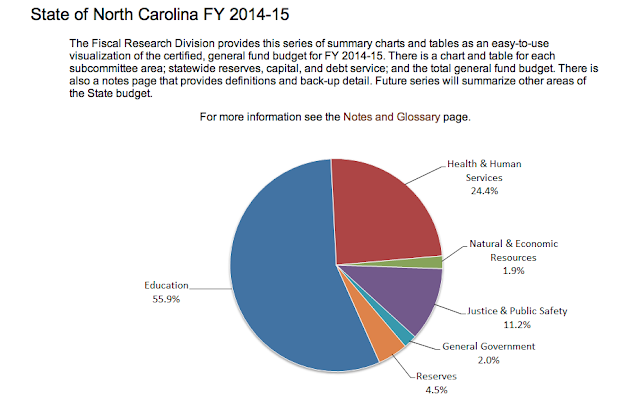 The chart below, which came from NC DPI, shows that 62.1 percent of education funds come from the state. Note that North Carolina ranks 9th in the nation for education spending as a percentage of the state budget. This is down from 5th, but still very respectable. 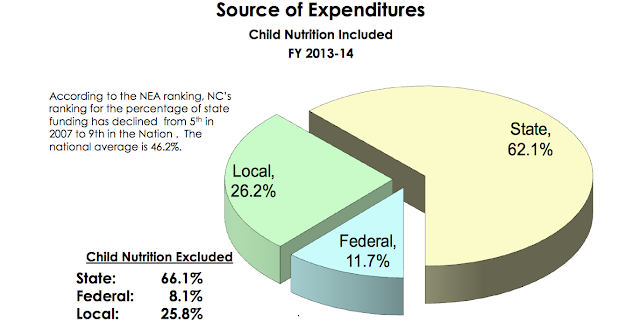 Finally, the graph below shows where teacher pay was raised in 2014 along with the reinstating of a pay step system. Starting pay was increased from $30,800 to $33,000 (a seven percent increase) but this year it will be increased to $35,000 (which is an additional six percent increase). This is just the start; our goal is to continue increasing teacher pay until we have among the best paid teachers in the nation. 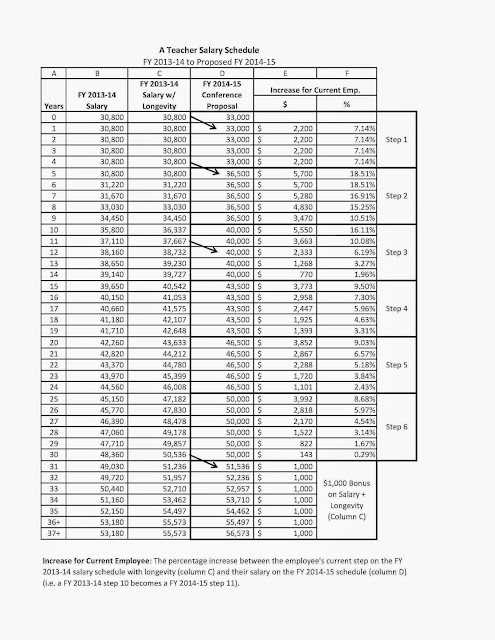